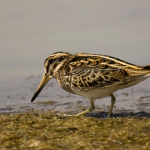 apart from a few noticeable differences. They are about two-thirds the length of its larger cousin with a bill length typically 40mm in length compared to the 70-80mm of the common snipe. The head pattern of jack snipe differs from common snipe in that there is no central crown-stripe; instead, there are two pale lateral crown-stripes, which are separated by an area of dark plumage. They also only have 12 tail feathers which is 2 less than the common snipe.

Unknown as a breeding bird in Ireland and Britan, the Jack Snipe breeds widely across the sub-Artic and migrates as far south as sub-Saharan Africa, India and south-east Asia. They are a regular winter visitor to Ireland and Britain which are its most north-westerly wintering areas. 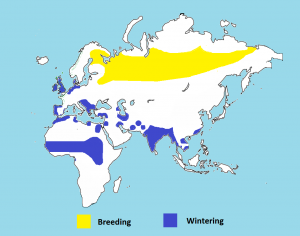 Conservation Status: It is Green-listed by BirdWatch Ireland and the RSPB, meaning it is not of conservation concern. However, like the common snipe, it is impacted by the loss and degradation of wetland habitats through afforestation, peat extraction and drainage for agriculture.

Ringing has taken place since 1909 and is a valuable tool that provides vital support for conservation efforts as it helps to understand how these processes influence population sizes over time. The below map from British Trust for Ornithology, show all records of Jack Snipe ringed in Britain & Ireland and recovered abroad (purple) and birds ringed abroad and recovered in Britain & Ireland (orange). 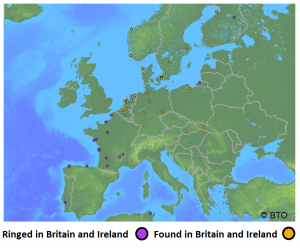